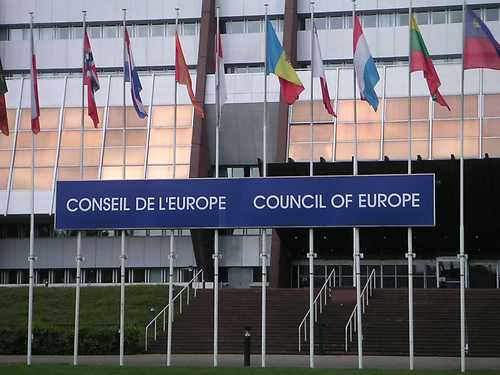 “Openness and tolerance are fundamental for a good society” stated Secretary of State of the German State of Hessen Mr. Mark Weinmeister in the Roundtable convened by ECRL in cooperation with Brussels office of the Council of Europe (CoE) and hosted by the State of Hessen.  CoE ambassador Torbjørn Frøysnes pointed out that conventions and legal frameworks are in place to secure citizenship with equal treatment.  Active participation from all groups in society is needed to secure their implementation, and religious leaders have particularly opportunities and responsibilities to contribute.

The Roundtable that took place 27th March that was moderated by ECRL Moderator Thomas Wipf brought around 35 participants from Council of Europe, EU Commission, EU member state missions, human rights organisations, religious communities and NGOs together with members of ECRL under the theme: “Welcoming the Other: Equal citizenship in Europe – the contribution of religion”.   ECRL General Secretary Stein Villumstad suggested in his introduction that citizenship goes beyond the legal framework.  There are social aspects that represent the mutual social responsibility that needs to be part of an inclusive society and spiritual aspects that represent values that are for the common good and claimed that “Religious and belief communities are well placed to promote an inclusive ‘we’ society, in which freedom of religion or belief is not only respected but promoted.  ‘Citizenship’ should be the sense of fraternity in diversity, and religion and belief in the public sphere should be visible contributions to a ‘wholesome society’”.

Brigitte Degen from the European Commission reviewed the outcome of “2013, European Year of Citizens”, and pointed particularly to the broad engagement of civil society through “The European Year of Citizens Alliance (EYCA)”.  Through broad consultations the alliance came up with a number of recommendations for follow-up. Recommendations are formed around three main themes: Active European citizenship as a project of society, An open and inclusive European democracy, and One European democreacy, three democratic pillars (see http://ey2013-alliance.eu/itsabouteuropeitsaboutus/ ) Degen formulated the following challenge to the roundtable:  “Most of  these policy recommendations are in line with ECRL recent Declarations. How can ECRL members reinforce those inclusion, solidarity, equality and non-discrimination messages?”

Ilya Subbotin of Council of Europe gave an overview of the European Social Charter, and pointed out that everyday living conditions, including workplace, health and education are important factors for achieving true participation in the society.  He encouraged religious communities to actively monitor the implementation of the provisions in the Social Charter, with reference to its Article 17 about dialogue and promoting a “New Narrative”.

Minorities are often vulnerable to discrimination, and Mark Barwick of Human Rights Without Frontiers posed the question:  “What can religious leaders and communities do to promote greater inclusion and equal citizenship?” and he goes on: “ I propose three words that can help guide us in our response to this question: Respect, Understanding and Solidarity”, and in conclusion he summed up: “In the end, as religious leaders and communities live respectfully, are intentional about promoting greater understanding and act in solidarity with one another in these ways, they begin to see that the Other is really not another after all. It is really about us, it is about becoming more human and living humanely in our diverse societies. It is about equal citizenship and the best that democracy has to offer.”

ECRL council member Rabbi Arie Folger challenged the European trend of showing disrespect for religious traditions, including male circumcision, use of religious symbols in the public space and removal of teaching about religion in educational institutions.  Through these attempts, he claimed, religious followers, particularly from minority traditions, will be regarded as less than equal citizens.  Council member Bhai Sahib Bhai Mohinder Singh commented that language is a problem: “We need a better understanding about each other, and we do not yet have the language to share the realities of our worldviews”.  ECRL council member Bharti Tailor raised the question of recognition of religious communities by governments.  She was referring to Hindu communities that were not recognized in some European countries:  “How can we be equal citizens if we are not recognised?”

The roundtable did not come up with concrete recommendations, but the exchanges based on the introductions clearly indicated the need to improve interaction between stakeholders in the European society in order to promote equal citizenship for all