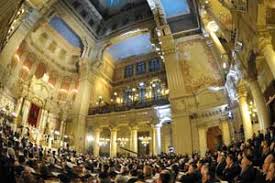 CALL FOR ALL IN THE RELIGIONS FOR PEACE FAMILY TO PRAY

Esteemed Colleague in Religions for Peace,

Allow me to call you as members of the Religions for Peace family to pray urgently-in accord with your own tradition-for our Brothers and Sisters in Syria. The agony of the Syrian people suffering an unbearable civil war and humanitarian crisis must cease.

There are reasons for hope as world political leaders plan to convene on 22 January for the Geneva 2 peace talks. These talks remain uncertain and it would help if all religious believers re-double their prayers for their success.

On Monday 13 January, the Vatican issued a strong statement deploring the unabated violence in Syria during a conference titled: “Syria: With a Death Toll of 126,000 and 300,000 Orphans of War, Can We Remain Indifferent?”  I was honored to join with 17 other senior religious, political and academic leaders at the Vatican to soberly ponder these realities.

As I write, I am with the World Council of Churches in Geneva as it convenes its member churches to address the Syrian crisis.

Muslims, too, around the world, including many in Syria, are also calling for prayer, humanitarian aid and a resolution to the crisis.

This is the time for all of us in Religions for Peace to pray in solidarity with our Syrian brothers and sisters, and to pray that the international community act with courage and wisdom to help ease the suffering of the Syrian people.

The international political negotiations for peace must also be accompanied by multi-religious efforts to advance peace.  This is why Religions for Peace is working to support Syrian religious leaders in their efforts to build an action oriented Syrian Inter-religious Council.

Please join your fellow Religions for Peace colleagues around the world by continuing to pray for the people of Syria and for progress in the Geneva 2 peace talks.

In solidarity for Peace, I remain